Grey Anatomy Season 19 Release Date Updates: Longtime Grey’s Anatomy fans were stunned by the number of changes that occurred and the fact that Grey Sloan Memorial has been left in shambles following the season 18 finale.

The residency program was canceled, two doctors resigned and were on the run from the police, and two hospital and show mainstays took a leave of absence with no word on when or if they’d return.

When you combine all of this with a slew of off-screen casting announcements made over the summer, the newest season of the medical drama appears to be entering an entirely new era.

Everything we know about Grey’s Anatomy Season 19 is listed below.

When Will Grey’s Anatomy Season 19 Be Released?

Grey’s Anatomy season 19 premieres in the United States on Thursday, October 6, at 9 p.m. ET/PT on ABC, following the season premiere of Station 19. The episode will be available to watch on Hulu the following day.

The following is the synopsis for the season premiere episode, “Everything Has Changed”:

“After a six-month pause, Grey Sloan Memorial has restarted its residency program.” As the attending surgeons work to restore the program to its former glory, a group of talented and ambitious young interns has been recruited. Meredith, who is still acting as interim chief, sees Nick for the first time since she turned down his offer to relocate to Minnesota.

“Meanwhile, Bailey informs Richard that she is not ready to return to work; Levi musters the courage to break the bad news to Jo, and things become awkward when Link realizes he has already met one of the interns.” The new doctors are thrown into their first day on the job dealing with injuries from a recent tornado with the help of Amelia and Maggie.”

Must Read: AMC Series “Interview With a Vampire Season 1 Release Date”, Everything We Know So Far

When Will Grey’s Anatomy Season 19 Premiere in the United Kingdom?

Grey’s Anatomy fans in the United Kingdom will be pleased to learn that season 19 will premiere exclusively on Disney Plus on Wednesday, October 26.

Alexis Floyd portrays Simone Griffin, a high achiever who is concerned about working in a hospital where she has had a traumatic experience. Niko Terho plays Lucas Adams, a burning hot charmer who is also a first-year surgical resident. 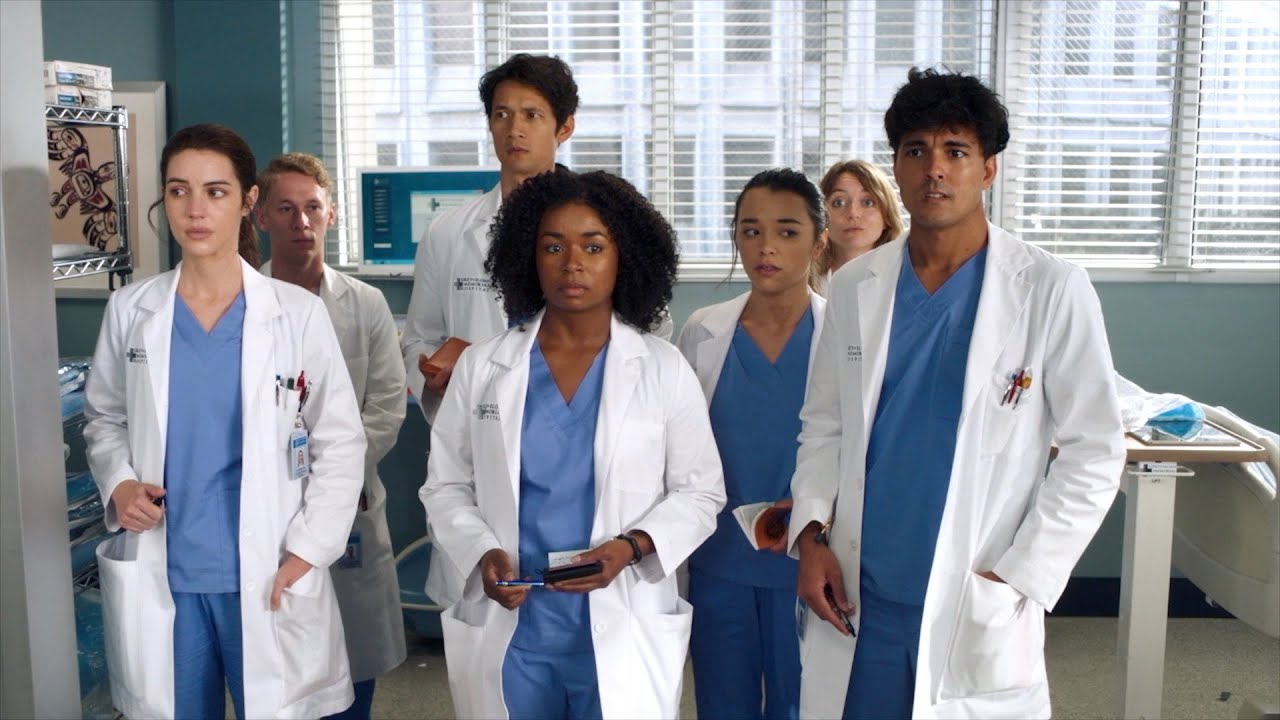 It wouldn’t be a Shonda Rhimes show if the storylines and plots were not shrouded in mystery. So, naturally, we don’t have much to report on what viewers can expect in the new season at this point.

If we refer back to the season 18 finale, Grey’s Anatomy fans can expect to see Meredith figuring out how to serve in her new role as interim chief of surgery. With the news of Pompeo’s reduced role in season 19, it appears she won’t be in charge of the hospital for long.

Furthermore, not only did Richard Webber (James Pickens Jr.) and Miranda Bailey (Chandra Wilson) quit their jobs, but the residency program has been canceled, and Teddy (Kim Raver) and Owen (Kevin McKidd) are on the run from the cops. To say Grey Sloan is understaffed is an understatement.

Other notable events from the finale that have set up interesting storylines for the season 19 premiere include Amelia Shepherd’s (Caterina Scorsone) blossoming romance with Kai Bartley (E.R. Fightmaster) and Jo Wilson’s (Camilla Luddington) rollercoaster romance with Atticus Lincoln (Chris Carmack).

The Grey’s Anatomy season 19 trailer has been released, and fans should be excited about what’s to come. Check out the video clip.

Grey’s Anatomy Season 19: How to Watch Anywhere on Earth

Because ABC isn’t available everywhere, you don’t have to miss Grey’s Anatomy season 19 if you’re on the road. It is possible to watch along with the rest of the internet. You can watch the show from anywhere with the right VPN (a virtual private network).

Are you unsure which VPN is best for you? We tested numerous VPN services, and ExpressVPN is our overall favorite (opens in a new tab). It provides fast speeds and excellent customer service.

Also Read: The Bling Empire Season 4: Netflix Release Date and Will It Be Renewed?

Grey’s Anatomy Season 19: How to Watch in Canada

Canadians in the North can watch Grey’s Anatomy season 19 on CTV, CTV.ca, and the CTV app on the same day and time as Americans.

ExpressVPN allows cord-cutters to easily access their services (opens in a new tab).

Grey’s Anatomy Season 19: How to Watch in Australia

Grey’s Anatomy season 19 will also be available on Disney Plus Australia, though no release date has been set. It could take some time.

If you’re traveling outside of the country and want to watch Grey’s Anatomy season 19 live, use ExpressVPN to connect to your services (opens in a new tab).

Alice, Darling Streaming: Will the Series Be on Netflix?

Lost Ollie: When and Where It Will Be Renewed?

Livestream of Mario and Omarion’s ‘Verzuz’…