Salman Rushdie, a best-selling author whose work has led to death threats, was stabbed in the neck and stomach as he was about to give a talk at the Chautauqua Institution in western New York on Friday.

Rushdie’s agent, Andrew Wylie of The Wylie Agency, said on Friday night that the writer was on a ventilator and likely to lose an eye and a damaged liver.

After the attack, a suspect was taken into custody, according to the New York police. At a press conference on Friday afternoon, New York State Police Major Eugene Staniszewsk said the suspect was 24-year-old Hadi Matar from Fairview, New Jersey. Matar was named at the press conference. 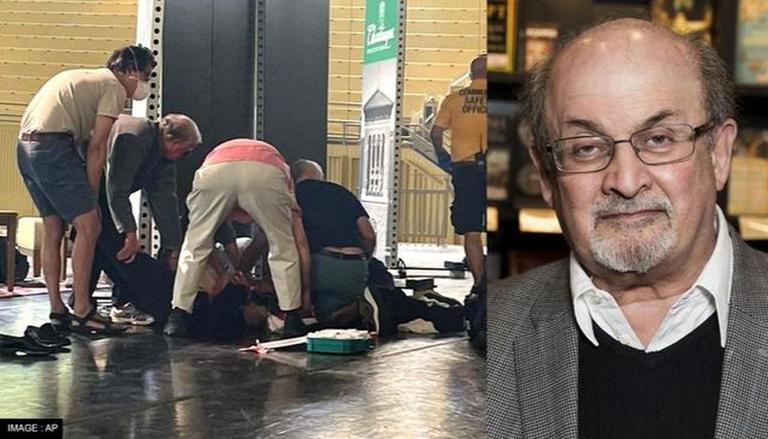 Staniszewsk said that officials did not know what motivated Matar yet. He also said that Matar has not been charged yet because officials are still working with the District Attorney’s office to look over the evidence and check on Rushdie’s condition.

In a statement released earlier Friday, New York Gov. Kathy Hochul said that Rushdie “is a person who has spent decades telling the truth to those in power. Someone who has been out there without fear even though he has been threatened his whole adult life.”

Travis Seward attended the event. He saw a man “bound” from the audience toward the stage with his “arms out swinging.” Seward stated that he did not hear the man yell anything and that Rushdie attempted to flee the attacker but fell.

“Everyone here is quite concerned,” Seward added. “It’s a serene setting that was unexpected.”

According to authorities, Rushdie was flown to a hospital by helicopter, and the “interviewer received a slight head injury.” According to Staniszewsk, the interviewer was treated and released from the hospital.

The Chautauqua Institution is “currently cooperating with law enforcement and emergency personnel on a public response,” according to its website.

In an emailed statement Friday, Suzanne Nossel, CEO of PEN America, a nonprofit organisation that aims to preserve free expression via the advancement of literature and human rights, said Rushdie had been “targeted for his words.”

“PEN America is in shock and horror after learning of a terrible, intentional attack on our former President and staunch ally, Salman Rushdie,” Nossel said. “We can recall no such instance of a public violent attack on a literary writer on American soil. We ardently hope and trust that his vital voice cannot and will not be suppressed.”

Rushdie is a British-American novelist of Indian origin. He has written more than a dozen books. Since the late 1980s, his novel “The Satanic Verses” has been banned in Iran, and many Muslims regard it as blasphemous.

“The book criticised or featured satirical references to the Prophet Muhammad and other aspects of Islam, as well as a character plainly based on Iran’s Supreme Leader.”

Following the publication of the book, Iran’s leader, Ayatollah Ruhollah Khomeini, issued a fatwa, or edict, calling for Rushdie’s execution.

Although Iran’s government has long distanced itself from Khomeini’s proclamation, anti-Rushdie feeling remained. Rushdie’s bounty was increased from $2.8 million to $3.3 million in 2012 by a semi-official Iranian religious group.

It is unclear whether Friday’s attack was related to the directive.

Colleen Lough, 65, of Grosse Ile, Michigan, went to Chautauqua this week for the first time and was situated roughly 20 rows from the stage when Rushdie was attacked. She described the intruder as wearing all black and hiding his face with “a black sock or anything like that.”

“It was just such a shock that this was occurring right in front of us, and everyone immediately started yelling, ‘No! no!’” she explained.

Lough is an Episcopal chaplain who has volunteered at the neighbouring Hurlbut Church, ministering to anyone who needs support as a result of what they observed.

“No one should ever face danger or violence for stating what they believe.” “She stated. “Even in these political times, when many of us disagree, everyone should be entitled to voice what they think and debate it without fear of violence.”

Dr. Michael E. Hill, President of Chautauqua Institution, stated at a press conference on Friday that the incident will have no affect on who the institute chose as lecturers.

“Bringing out ideas has been a part of his entire existence. He is regarded as one of the most influential defenders of free speech. And, in light of this tragedy, I believe the worst thing Chautauqua could do is abandon its goal, which I doubt Mr. Rushdie would want “Hill stated.

“Quichotte,” Rushdie’s most recent work, was released in 2019. Rushdie’s modern-day Don Quixote satirises former President Donald Trump’s America in his take on the Miguel de Cervantes classic. The novel was nominated for the Booker Prize.

According to the book description, the author plans to release “Victory City: A Novel” in 2023, which follows a lady who “breathes a fantastical kingdom into reality, only to be consumed by it over the decades.”

Check Also: Who is Drake Milligan? Amrican Got Talent Announce His Debut Song Album | Dallas/Fort Worth

Car Masters: Rust to Riches Season 5: Is it Happening or Cancelled?

Why RDJ’s Blackface Was Not Controversial in Tropic…

Who Did Kathy Hilton Reportedly Use a Gay Slur Against?

Jennifer Lopez Net Worth: How Much Money Does the American…